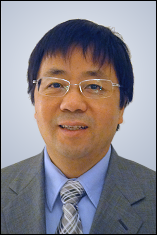 Professor Wang's research interests are electroanalytical technologies, advanced materials for rechargeable batteries, fuel cells and supercapacitors. He has published over 220 papers in peer-reviewed journals including Science, Nature Energy, Nature Materials, Nature Nanotechnology, Nature Chemistry, and Nature Communications, Proceedings of the National Academy of Sciences, Journal of the American Chemical Society, Advanced Materials. His research has been cited more than 13000 times and has an H-index of 63 (ISI. 11/20/2018).
In collaboration with ARL scientist, he achieved the scientific breakthrough in electrolyte materials with the invention of water-in-salt electrolytes for Li-ion batteries (Science 2015) and Zn-air batteries (Nature Materials, 2018), which opened an entirely new area of high voltage aqueous electrochemistry and batteries that never existed before, and has inspired many researchers to follow. As a follow-up of this ground-breaking technology, he is currently collaborating with Scientists in Safe, a world-leading Li-ion battery manufacturer, to demonstrate a 500 Wh aqueous battery pack for electric vehicle application. He also developed a fluorinated electrolyte to form LiF-rich solid-electrolyte-interphase (SEI) on anode and Cathode-electrolyte-interphase (CEI) on the high-voltage cathode to stabilize electrodes (Nature Nanotechnology, 2018). This new design philosophy of SEI sets the foundation for new battery chemistries for years to come.

Professor Wang currently teaches or has taught the following courses:

Click on the Researcher ID or Google Scholar to view all publications, citations, and H-index

To view a complete list of Professor Wang's publications, citation metrics, and H-Index, please consult his entry on ResearcherID.

Technology is based on the work of Prof. Chunsheng Wang in the A. James Clark School of Engineering

From Innovation to Inauguration

Among the nine 2021 Invention of the Year nominees, four are led by or include Clark School researchers.

From extreme batteries to windows made from wood, Clark School’s trendsetting work ranks it among the country’s Top 10 public engineering schools for the 3rd consecutive year.

Whittingham won the 2019 Nobel Prize in Chemistry for his work with Li-ion batteries.

Simulations performed by Siddhartha Das and his research team suggest a way to improve the “water-in-salt” approach.

National Institute of Standards and Technology to collaborate

ARL to Fund $30M in Equipment Innovations for Service Members

The competition recognizes distinguished graduate student researchers in order to help propel their careers and demonstrate the value of high-quality engineering research.

The design bolsters both battery safety and performance.

Hu and Wang identified by Web of Science

What’s Next for Next-Gen Batteries?

'Super Electrolyte' Capable of Operating in Extreme Temperatures, From the Arctic Tundra to the African Savannah

Each awarded $25K to sponsor research.

Researchers have synthesized a new cathode material from iron fluoride that surpasses the capacity limits of traditional lithium-ion batteries.

Researchers revive an old chemistry with a new electrolyte.

UMD ChBE researchers develop a cluster of azo materials for use in alkali-ion batteries.

Long-term Ghodssi-Culver partnership has used the Tobacco mosaic virus as a biological nanoscaffold for groundbreaking devices.

Fudong Han focuses his research on improving the all-solid-state-battery.

The UMD team placed 5th at the Mid-Atlantic Regional Competition, securing their spot for Nationals in October.

A team of researchers at UMD, ARL, and colleagues have developed a battery that is at once safer, cheaper, more environmentally friendly, and more powerful - by adding a pinch of salt.

UMD Invention of the Year Nominees Push Boundaries in Health, Energy, and Security

Campus inventors to be honored at Celebration of Innovation and Partnerships

For Batteries, One Material Does It All

You Can Help Our Chem-E Car, Testudo Mobile, Get Competition-Ready!

Energy storage research at UMERC has been selected by NASA to potentially power future space missions.

The center develops highly ordered nanostructures that offer a unique way of looking at the science of energy storage.

Research in energy conversion and storage systems serves as model for field.

Team Thirsty Turtles will take "Pride of Maryland" to San Francisco in November.

Professor seeks to improve diagnosis and treatment of fungal diseases in immunocompromised patients.

"Exceptional sophomores and juniors" chosen from nationwide field of applicants for $6K-$10K internships.

Clark School research could improve the performance and cost of low-temperature fuel cells for transportation, electronics.

Bad Virus Put to Good Use

Alumni asked to join in effort to improve student experience.